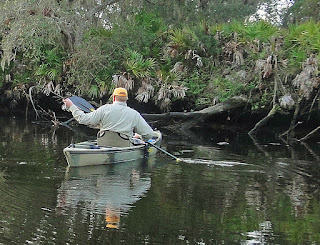 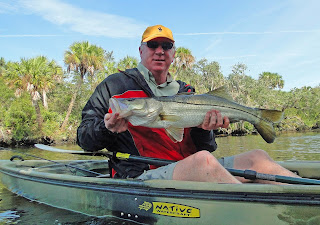 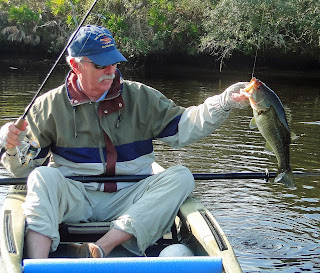 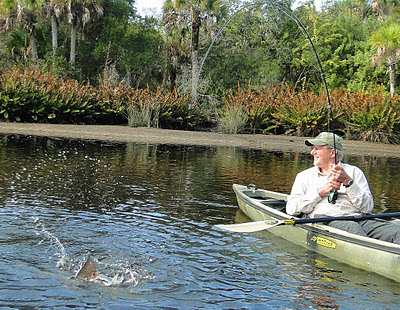 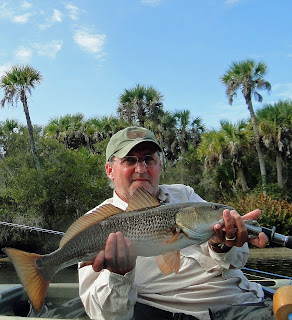 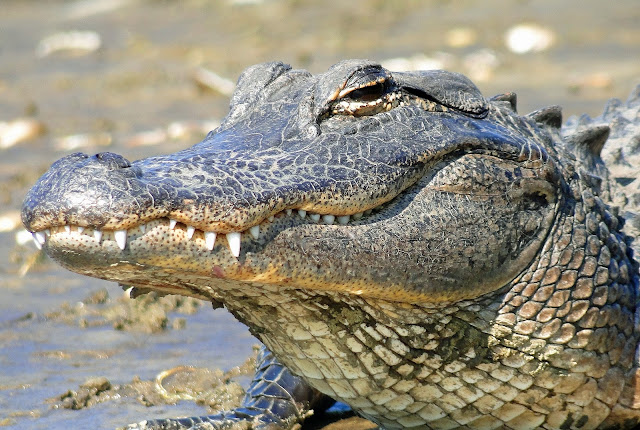 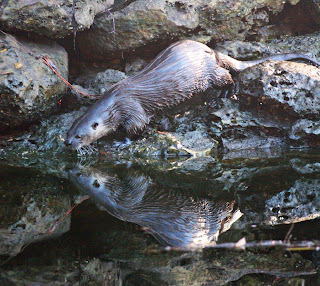 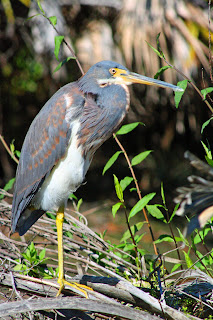 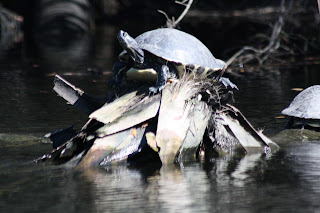 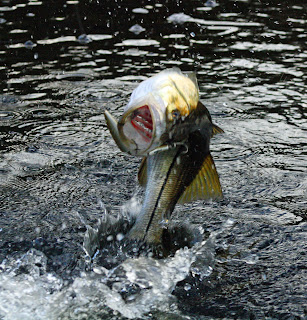 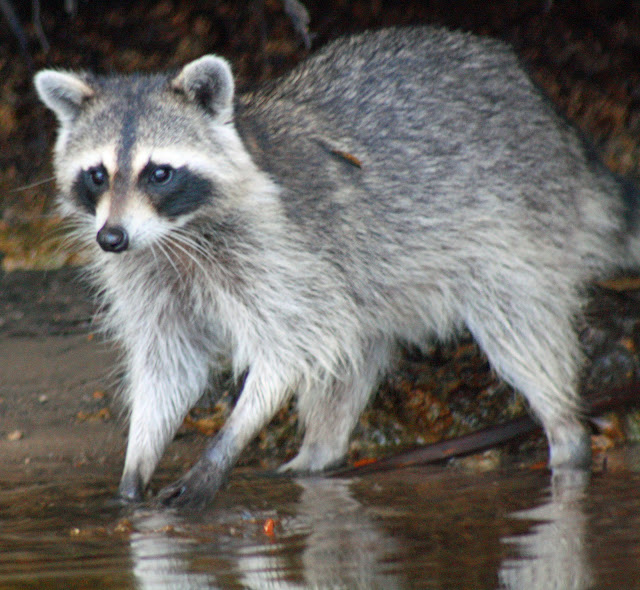 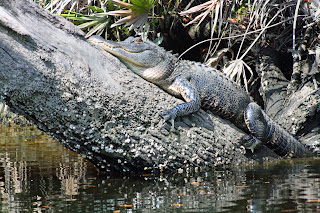 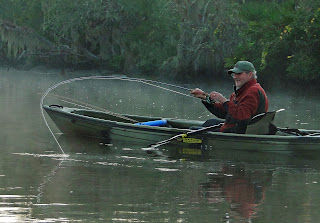 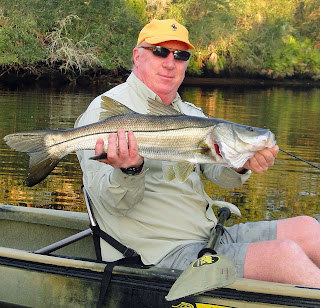 ﻿ ﻿
Cold is not the reason I moved to Florida in 1971.
No, I moved to escape it.
However, we do experience a bit of cold weather in the winter.
But I’ve learned to deal with it. In fact, I’ve learned there can be some mighty fine fishing when the weather’s a tad chilly.
When the water temperature dips into the low 60s or high 50s, you can usually find me on local rivers. That’s because snook and several other species move up rivers in the winter, seeking warmer water. And when this happens, fishing can be very productive.

I most often fish the Myakka River, a picturesque stream that begins in Polk County and meanders through Sarasota County before emptying into Charlotte Harbor.

I conduct 6- and 8-hour trips on the river. This trip is for serious anglers, but newcomers will enjoy the fishing and the scenery!

Most often I launch at Snook Haven, a well-known spot located at 5000 E. Venice Ave., near Venice. It’s about a mile west of Interstate 75.

I like to paddle downstream to a series of deepwater spots that usually hold good numbers of big snook. In addition, anglers will get a shot at redfish, largemouth bass and some big spotted and Florida gar.

I encourage fly anglers to use 8-weight outfits and 20-pound leaders. Most sinking baitfish patterns will produce.

Fishing on the river isn’t fast. But what it lacks in numbers, it make up for in quality. For example, we caught snook exceeding 30 inches on seven of our first nine trips in 2012, including five snook of more than 35 inches. Largest snook was a 37-incher.

We target the big fish on deep ledges and drop-offs. You’ll find many other anglers casting lures toward the banks and fallen trees. While this approach does work, you’ll catch more and bigger fish when working the deeper water.

A River Slam is any three of the above species. Catch all four and it’s a Grand Slam. Add a tarpon and you’ve got something really rare – a Super Slam.

We’ve had several River Slams in 2012 and even a couple of Grand Slams. I came within a redfish of a Super Slam on Jan. 10. I got the tarpon, but didn’t land a redfish.

Fly fishing can be good. John Garcia of California caught snook and landed a 28-inch redfish on fly. Dick Badman of Pennsylvania has landed snook.

Key to success is keeping your lure or fly in the water and not losing focus. It’s tough fishing, but persistent anglers are usually rewarded.

Sometimes, anglers catch their biggest fish first thing in the morning. Sometimes, it’s a mid-day. And at others times, it’s during the final hour.

We call 10 fish “par” on the river. Anything more is icing on the cake.

In addition to fine fishing, there is a plethora of wildlife to see on the river. Alligators, blue heron, otters, raccoons, wild hogs, whitetail deer, ibis, red-tailed hawks and other wildlife are commonly seen.

You don’t have to be alarmed by alligators. Wild gators don’t like to get close to humans. And during cold weather, we usually only see them “sunning” themselves on the banks or sand bars during the warmer afternoons.

Fishing the Myakka River during the winter is one of my favorite endeavors.

Posted by Steve Gibson at 1:47 PM No comments:

Newcomers guide to the exciting world of kayak fishing

Welcome to the thrilling and wonderful world of kayak fishing!


Newcomers will be amazed at the ease and productivity of fishing from a kayak. On average, even inexperienced anglers will catch more fish while fishing from a kayak than they will from a motorized vessel. The reason is kayaks are very stealthy – and the fish do not know you’re around.

I use Native Watercraft Ultimate 14½-foot kayaks, so there’s no need to fear capsizing. The kayaks are so stable that I often fish while standing up. I don’t allow clients to stand because of obvious liability issues, but the kayaks are very stable.

I supply kayaks, safety equipment, rods, reels and all lures. I also supply fly rods, flies and leaders for those who prefer to fly fish.

During warm weather, I suggest anglers wear a long-sleeve fishing shirt, cap or hat, shorts and footwear that you don’t mind getting wet. Most of the time, we do not wade. However, your feet will get wet getting in and out of the kayak.

If we choose to fish while wading, tennis shoes and sandals are not good choices. They will fill with sand and shell. In addition, they pull off when wading in soft mud.

Wading anglers should wear “flats boots.” They are similar to dive boots and are made for wading anglers. I use Orvis wading boots: http://www.orvis.com/store/product.aspx?pf_id=03JQ&dir_id=758&group_id=11059&cat_id=5421&subcat_id=6047.

Believe it or not, but it does get chilly in Florida. For winter fishing, I usually wear a long-sleeve shirt, fleece-lined vest, long fishing pants and wading boots. If it’s going to warm up by mid-morning, I wear shorts.

I supply sandwiches and drinks on all-day trips. Anglers supply their own food and snacks on shorter trips.

Rain gear often comes in handy. I carry an extra rain jacket and also have a few inexpensive ponchos for clients.

Sunscreen should be applied prior launching and should be reapplied a couple of times while out.

I usually drift while fishing from the kayak. It’s important to make sure the bow of the kayak is pointing in the direction of your cast. When drift fishing, I rest the paddle on my lap in order to make quick bow adjustments.

We anchor and fish occasionally. I have anchor trolleys on the port (left) side of each kayak. Simply clip the anchor line to the O-ring on the trolley and position the anchor (I’ll tell you) at the proper place along the kayak. By using the anchor trolley, we can face the direction we need to cast at all times.

You may bring your own equipment, but I suggest you use mine. My tackle is rigged and ready to go for local conditions and species.

I tie my own flies and leaders. Flies are designed for area fish in a variety of conditions.

I use D.O.A. Lures for the most part. In addition, I use MirrOlure products, topwater plugs and a few spoons.

After you book your trip, I will call you the afternoon/evening prior to your trip to discuss time and place to meet. Clients often follow me to our launch site and are able to leave as soon as the trip is over.

I require a 50-percent deposit to guarantee your date. I will refund the deposit within two weeks of your scheduled trip – provided I can book another trip to replace it.

Although I have no control over the fish, I can assure you that I will make sure your trip is everything you expect. I place an emphasis on fun.

Thank you for your interest in Southern Drawl Kayak Fishing!

Posted by Steve Gibson at 1:14 PM No comments:

Steve Gibson
Sarasota, FL, United States
Steve Gibson is a full-time kayak fishing guide based in Sarasota, FL. He is also an award-winning outdoor writer and photographer. He caters to anglers of all skill levels.

We offer four-hour, six-hour and full-day outings with spin or fly tackle. We supply all tackle and lures. However, you may bring your own.

We also have spots in The 'Glades where we encounter juvenile tarpon and snook.

We have a fleet of two NuCanoe Frontier 12-foot kayaks and a 13 1/2-foot NuCanoe Pursuit.